In 1819, the United States formally abandoned any claim to the territory of Texas through the Adams-Onis Treaty.  That treaty upset many US citizens in Louisiana and Mississippi who believed that the territory conveyed in the Louisiana Purchase (1803) include parts of East Texas.  James Long of Natchez,  Mississippi was particularly pissed.  In June of 1819, Long and Eli Harris led an "expedition" to Nacogdoches, New Spain. Thanks to the fact that rapid mass troop transport had not yet been invented, Long and Harris successfully established the first (?) Republic of Texas. On the noble side of the revolution, the citizens of the Long Republic promoted religious freedom, tolerance and freedom of the press. On the more traditional side of revolutions, each member of the "expedition" received 10 acres of land for their sacrifice.  Long attempted to enlist the assistance of pirate Jean Lafitte, promising to appointment Lafitte governor of Galveston.  What did Long learn?  Don't trust pirates.  After accepting the governorship, Lafitte "traded" the information about Long's revolution to the Spanish who had not yet realized that a small portion of the empire had been usurped.  Shortly thereafter, 500 Spanish troops arrived at Galveston and drove Long and his expedition back to Louisiana.  The Long Republic lasted four months.  The flag of the Long Republic was red with a single white star in the middle.
Posted by Henry Wright at 6:41 AM No comments:

A Switch for Switchblade Enthusiasts in Texas

Posted by Henry Wright at 12:17 PM No comments:

Fredonia or Petoria: The Flag Makes the Nation

In April of 1825, Hayden Edwards received a grant from the districts of Texas and Coahuila (districts of Mexico) to colonize the area of Nacogdoches with 800 families.  Edwards began to promote and organize the colony with his brother B. W. Edwards.  As a condition of the grant, Edwards had to honor any prior grants of land in his settlement territory.  This led to a vetting of prior settlers in the area to determine who had a legitimate land claim, a contentious process which sparked a feud between Edwards and the Mexican government. Those who lost their land appealed to the regional Mexican authorities.  Empresario Stephen F. Austin attempted to quench the rebellious tendencies of Hayden Edwards. In a letter to Edwards, Austin wrote, "The truth is, you do not understand the nature of the authority with which you are vested by the government, and it is my candid opinion that a continuance of the imprudent course you have commenced will totally ruin you, and materially injure all the new settlements." The truth was that Edwards envied and despised Austin. So, being told by Austin that he should know his place probably pushed Edwards to secede from Mexico. The irony of this is that Austin would eventually mount his own rebellion, successfully establishing the Republic of Texas. In preparation for the secession, Hayden signed a treaty with the local Cherokee Indians (represented by the red band in the flag) and declared independence from Mexico on December 21, 1826. Assisted by Stephen F. Austin (and the Cherokee Indians), the Mexican government forcibly suppressed the rebellion, which ended on January 31, 1827. (more info on Fredonia) After fleeing to Louisiana, Hayden Edwards returned to Texas during the Texas Revolution and settled in Nacogdoches. Hayden Edwards died within the territory of his colony in 1849.
.
Posted by Henry Wright at 7:24 AM No comments:

In the summer of 1779, Spain designated the community around the mission of Nuestra Senora de Guadalupe de los Nacogdoches a "pueblo."  Older than the six flags of Texas, the town of Nacogdoches claims that it has flown flags of nine nationalities: Spain, France, Mexico, Republic of Texas, United States, Confederate States, and the forgotten Magee-Gutierrez Republic, Long Republic, and the Fredonian Republic.
Posted by Henry Wright at 11:04 AM No comments:

Cool Off on Labor Day with a Moscow Mule 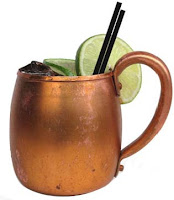 As with the most noble drinks (martini, mint julep, and the flaming volcano) the Moscow Mule has its own serving glass, the copper cup.  Despite the name, the Moscow Mule is a West Coast creation, just like Labor day itself.  Oregon, on February 21,1887, passed the first legislation honoring the hard work of American laborers.  Fifth-four years later, John Martin and Jack Morgan claimed that they invented the drink at their bar in Hollywood.  That may be Cock-n-Bull -- the bartender at the Cock-n-Bull Wes Price claimed that he was the true inventor of the drink.

Here is the Recipe:
1 part Vodka
3 parts ginger beer
1 tsp. sugar
Squeeze of a lime wedge
Garnish with mint and lime slice
Posted by Henry Wright at 8:06 AM No comments:

Anniversary of the Confirmation of Thurgood Marshall to SCOTUS

On June 12, 1967, Justice Tom C.Clark (native Texan and graduate of the law school at University of Texas) announced his retirement from the United States Supreme Court.  Earlier in the year, President Lyndon B. Johnson (also a native of Texas) appointed Justice Clark's son, Ramsey Clark, to serve as Attorney General. The potential father - son / judicial branch - executive branch conflict prompted Justice Clark to step down from the bench.  On the way down, Justice Clark enthusiastically advocated for the appointment of Thurgood Marshall, then solicitor general, as his replacement.  As retold by President Johnson, Justice Clark predicted that "the President would appoint someone who will fill my shoes to overflowing and possibly break them open."  After an unusually long delay (although not by today's standards), the Senate confirmed the appointment with a vote of 69 to 11.

Posted by Henry Wright at 6:37 AM No comments: 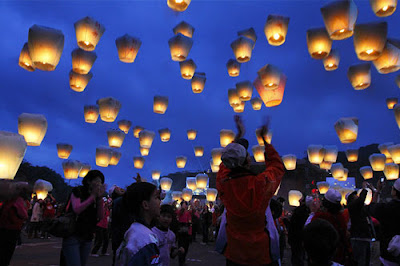 A good science project for kids and adults alike is creating a Sky Lantern.  But, with burn bans throughout most of Texas, this project should remain in its conceptual stage... EXTREME FIRE HAZARD, and the remains of the lantern are harmful to English cattle and sheep. 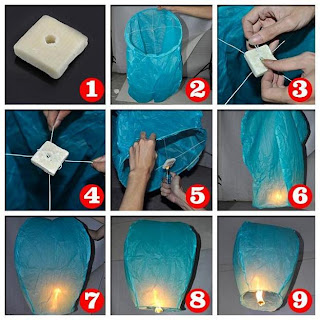 The Sky Lantern (or Kongming Lantern) is basically a small hot air balloon. The apocryphal origin of the sky lantern goes all the way back to the famous Chinese military strategist Zhuge Liang (also known by his honorific title of Kongming, 180–234 AD) who used the lanterns in the battle field to scare superstitious enemies.  Other inventions attributed to Zhuge Liang include landmines (could have done without those) and the repeating cross bow.

Zhuge Liang (more info) wrote down his philosophy of combat in a book which roughly translates to Thirty-Six Stratagems.  This is not to be confused with Robert Green's 48 Laws of Power, which is the second most popular book in American prisons.  Instead of catch phrases like "Crush your enemy totally!," which sounds like the maniacal rants of Steven who fishes everyday down by the river, Zhuge Liang offers more mysterious mantras.  Consider the following:
1) Deceive the Heavens to cross the Ocean.
12) Take the opportunity to pilfer a goat.
14) Borrow a corpse to resurrect a soul.

Posted by Henry Wright at 7:43 AM No comments: