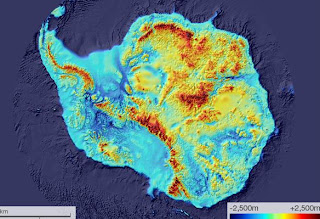 If one were to remove all of the ice from Antarctica, this is what the polar continent would look like according to Hamish Pritchard of the British Antarctic Survey.  But, what would the coastlines of the world look like if the Antarctic Ice Shelf were to melt.  Approximately 70% of all of the fresh water in the world in currently cuddling the jagged land mass at the South Pole.  If the ice melted, the sea level would rise approximately 200ft. (Note: Death Valley is currently 200ft below sea level.) That is not enough to make Waco, Texas (elevation 550ft) beach front property, but it would shorten the drive to the coast by a third.  This map shows the Texas coastline after a 229 ft. (70m) increase in sea level. 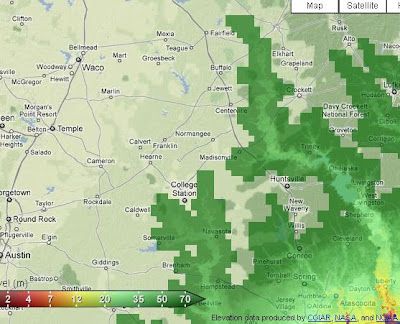 Email ThisBlogThis!Share to TwitterShare to FacebookShare to Pinterest
Labels: Science