On page 4 of the Waco Evening News this day, 123 years ago, a curious note was placed regarding an incident at the saloon.  Unfortunately, inside jokes are lost in time.  Who was the traveler so "well known in Waco" that a name was unnecessary? 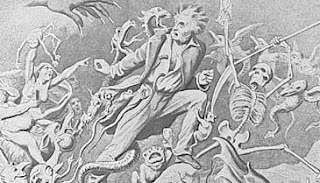 "The banks of the dark river were pressed mighty close to-day, by the staggering feet of a commercial traveler, well known in Waco.  He fell from a chair in a saloon about ten oclock this morning, and was taken to the city hall.  His symptoms verging on a fierce form of mania a potu, grew alarming and a physician was called in.  At three this evening he was thought to be out of danger, but if he should recover he will have made a narrow escape from the dark waters of the Styx."

"Mania a potu" - madness from excessive consumption of alcohol.
Posted by Henry Wright at 10:46 AM