I owe thanks to the German Medievalist (Dr. Ann McGlashan) who introduced me to a book on the history of Germanic Law, in particular the Heidelberg Illuminated Manuscript of the Sachsenspiegel.  Sachsenspiegel  means "the Saxon Mirror."  The Sachsenspiegel is an important and interesting text written around 1225 by Eike von Repgow.  Eike was tasked with compiling into a single German book the current Saxon common law, feudal law, and legal procedure.  Although the Sachsenspiegel was meant for private use, Eike inadvertently created statutory law for the Germanic region.  The text was copied and widely distributed as the authoritative compilation of the law of the king or emperor.

The Heidelberg Illumination of the Sachsenspiegel (c. 1330), marks an intriguing intersection between law and art.  As an aid to those how cannot read (or, perhaps, following the principal that a picture is worth a 1000 words) the "statutes" are illustrated.

The illustration below is for the lawyers and judges at the Edge.  The illumination depicts the Statute of Limitations.  A case is barred after the expiration of one year and a day from the ensuing event.  This illustration shows the judge dismissing the case without testimony from the defendant.  The plaintiff waited one year (LII) and six weeks (VI) to bring is claim to his brother's(?) estate.  As a result, the pregnant woman does not have to relinquish possession of the marital home to the heir of her deceased husband. 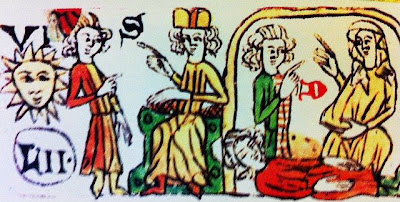