Over the Edge - Huffington & O'Rourke

Is our government ungovernable?

Or something like that was the topic in a recent Intelligence Squared Debate.  The topic was less important and interesting than the contestants.  On one side, arguing that the US government is ungovernable, was Arianna Huffington (yes, the Huffington Post Huffington).  On the other side was P. J. O'Rourke, the guy who said "Giving money and power to government is like giving whiskey and car keys to teenage boys" and wrote such books as "Eat the Rich" and "Don't Vote, It Just Encourages the Bastards." 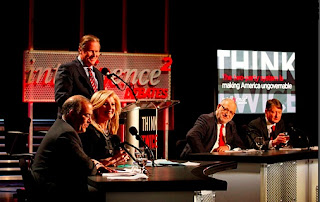 The best line from the debate:
Arianna Huffington, "Well, the idea that it’s dumb kids that are the problem is just charming P.J. I mean, whatever P.J. says, he's charming because he's funny. But it's not true."
You can relive the debate.  You may learning nothing new about American politics, but you will be well entertained.
Posted by Henry Wright at 4:28 AM