The Edge is a late-comer to the community of Charlie Sheen gawkers. Last night's show in Detroit, entitled "Violent Torpedo of Truth: Defeat is Not an Option," derailed after one hour.  The audience booed Mr. Sheen off the stage and he did not return.  Some lines from the event may provide insight into the dark, too dark to see, light is not on, mind of Mr. Sheen. 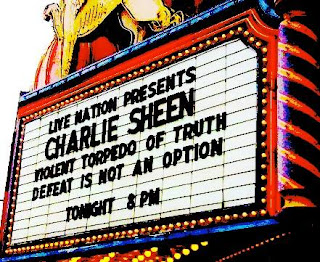 Opening line: something about training the Vatican assassin in each one of us.
Self-description of his mind: "napalm dripping brain"; a leaking bag of mayhem.
Response to the jeering crowd: "I already got your money, dude."
I like irreverent drug fiends, the late Hunter S. Thompson in particular. But, Charlie Sheen makes me sad. That he did this in Detroit... well, I will let native Detroiters, such as Osler at the Razor, speak to that dimension of the Sheen Tragedy.
Posted by Henry Wright at 5:46 AM

Email ThisBlogThis!Share to TwitterShare to FacebookShare to Pinterest
Labels: Bizarre