The Real March Madness is in Oman 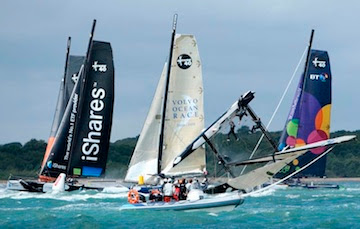 Basketball may be exciting and interesting if you take the time to watch it, but it is an outdated, 20th century sport. The 21st century is the age of Extreme Sports. Today, my eyes are on Oman for the final day of the first round of the 2011 Extreme Sailing Series.  For the uninterested uninitiated, Extreme Sailing kicks it up a notch.  USA 17, the boat that won the 33rd America's Cup in 2010, reached a top speed of 17 mph in the competition.  An Extreme Sailboat can reach speeds of 28mph on a good race day with 17mph winds.  The courses are short, the winds are tricky, the sailing is grueling.  Extreme sailing is Formula 1 on the high seas... without a motor and about 10 times slower and, today, in Muscat, Oman.  For those ready to jump onboard, the tack-by-tack coverage is streamed live online.

Email ThisBlogThis!Share to TwitterShare to FacebookShare to Pinterest
Labels: Sports