Before the Edge - Catch, Jimmy

Since we are on the topic of Comedy, I thought I would troll the Texas Legislature for recently proposed Bills. I doubt there will ever be anything as humorous as the Bill proposing a ban on lewd cheerleading, but I can hope.  (Note:  I of course think lewd cheerleading should be discouraged... my amusement was picturing the legislative committee renting a bus to travel Texas and research lewd cheerleading.) Today has come close with the Report on HB 824, a Bill seeking "to promote fathers' involvement with their children before birth." I suspect that they mean before the birth of the child... not the father. Prenatal-patriarchy should also be encouraged.  Here are some suggested activities in which a father and his unborn child could engage (traditional father/child activities don't conjure a pleasant image): 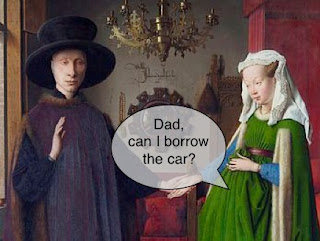 Now that I think about it, there is probably a dearth of prenatal-parenting-legislation. What other legislation do we need?
Posted by Henry Wright at 7:42 PM